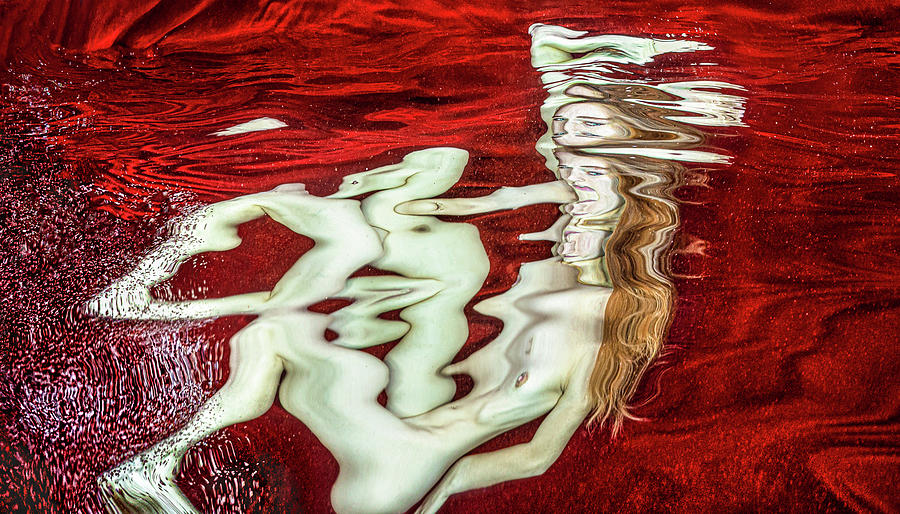 A passionate furious energy radiates in the ripples of red that overtake the reflection. Intense motion, stirring the water into an explosion of bubbles we encounter “Trouble”. The model, the surface, and the movements take on lives of their own, clashing and conflicting before our eyes. The woman’s form melts and dissolves into the vibrant ribbons of color as if we have fallen into the surrealist dreams of Salvador Dalí. The arms, the face, the breasts, and the legs all begin to replicate until the singular nude female form becomes an unknown number of women. They stop, turn to us, and glare letting us know we are an unwelcome voyeur at this encounter.

“Trouble” is a part of Alex Sher’s popular series REFLECTIONS - underwater photographs that could be almost mistaken for abstract paintings as they bring up recollections of masterpieces by Picasso, Dali or Gustav Klimt. In fact REFLECTIONS are straight photographic capturing of the water’s surface from below, with a submerged underwater camera. The photographs freeze natural momentary reflections in water surface - the unique kaleidoscopic fragmentations of human body into nearly unrecognizable forms.

Original gallery quality archival pigment print face mounted to 1/4" museum grade acrylic plate backed with 1/8" dibond and hidden frame.
Limited edition of 12.
The artwork is furnished with certificate of authenticity, signed by artist with artist's name, edition number, edition limit, and other details.
The artwork needs no framing; it is being hung by a hidden frame on the back. Additional framing is available upon request.